By the beginning of spring, we have prepared for you two major updates of LeaderTask for desktop PCs. And this is not just a release with bug fixes and the introduction of small improvements, but a serious qualitative leap in the development of our ecosystem and a great reserve for the future.

You are going to appreciate the new design, functionality, improved performance and bug fixes.

Today we will tell you about the new version of LeaderTask for MacOS. 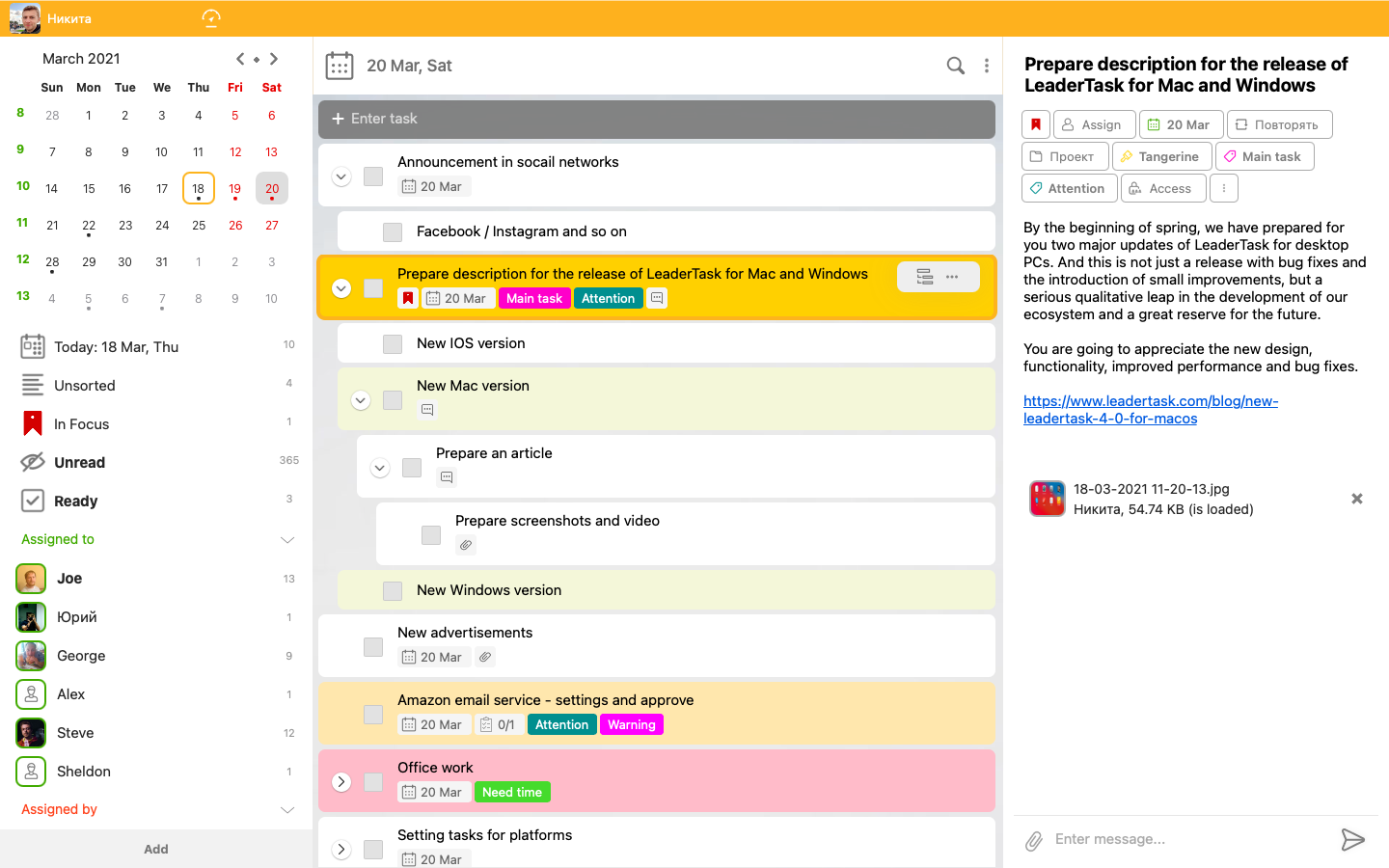 The appearance of the new LeaderTask has undergone major improvements. However, we did not make global structural changes in the system and left the usual 3 areas: Navigator, Task List, and Properties.

But their visual and functional components have changed.

It became more " neat” and visually more uniform. We got rid of the different style icons of the sections, updated the Calendar, or rather its appearance.

Avatars of icons, calendar dates, and teammates are no longer circular elements. Now all the elements of the Navigator have a common structure and appearance.

Only Mac users will appreciate this. In full-screen mode, when the top toolbar is called, we made an animated extension of the panel of buttons for closing and minimizing the application. This is a small thing, of course, but it can not but be an example for our pride. When we did this, we were surprised to find that only a few applications (for example, Microsoft Word) have such a simple, but very beautiful animation element.

This is the subject of our special pride in the updated LeaderTask for Mac. 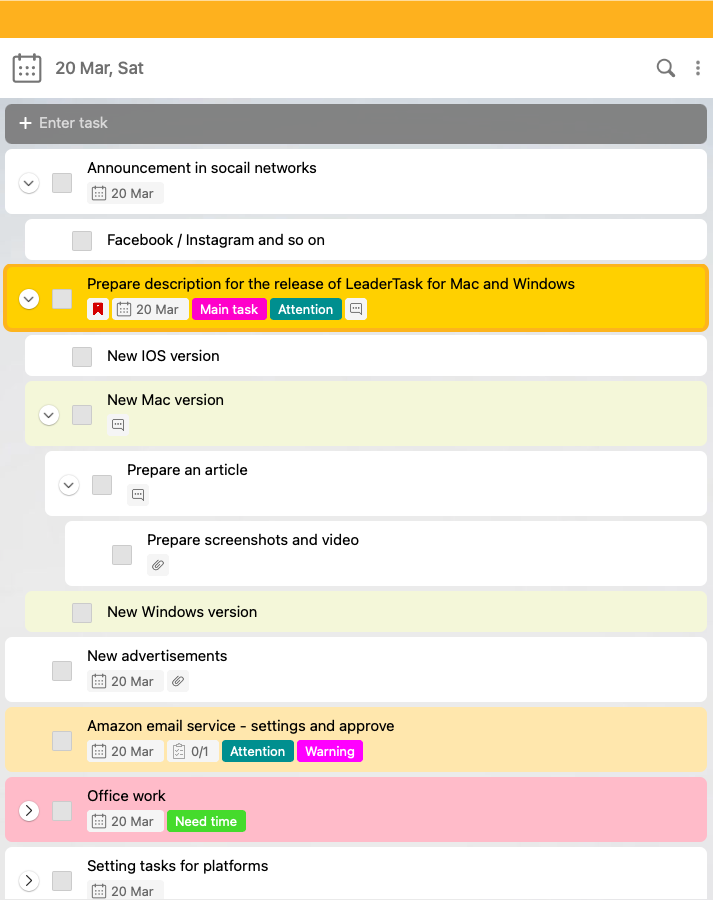 The first thing we did was to visually highlight the panel of the section where the user is located - it is immediately clear which section you are in.

Next, we moved “Search” and “Filtering” from the upper-right corner of the program to this panel. Now you do not need to reach far with the mouse, and it is obvious that these elements belong to the task list, and not to anything else.

Well, actually what was dont with the list itself. We also put it in order for more comfortable work with tasks:

It appears when you hover over the task and allows you to quickly add a subtask, copy, cut, or paste it into the list. In general, we pursued one simple idea - to get rid of using the right mouse button and make working with the program simple and easy.

We removed small and unreadable icons of the attached file, task chat, notes, checklist, and dates from the lower right corner of the task in the list, made them larger, and moved under the task name to the most obvious place for them - where all the tags, performer, project, and so on are located.

Now the task in the list has all the parameters in one place. This makes it easier to work with the list and allows you to focus on the work, rather than identifying the icons and what they mean.

We not only moved all the parameters of the task to one place, but also thought through their visual display. Each task parameter is now framed in a "cloud", and the parameter icon has a color corresponding to the property.

The task now displays a maximum of 5 attributes in the list. If the task has more than 5 of them, then a “cloud” appears with an indication of the number of parameters that are not included. You can see all the parameters of the task by opening it.

We also did a lot of work on the Properties. Let's not hide it, we went through more than 3 iterations before we came to a working version.

So, what's so interesting there: 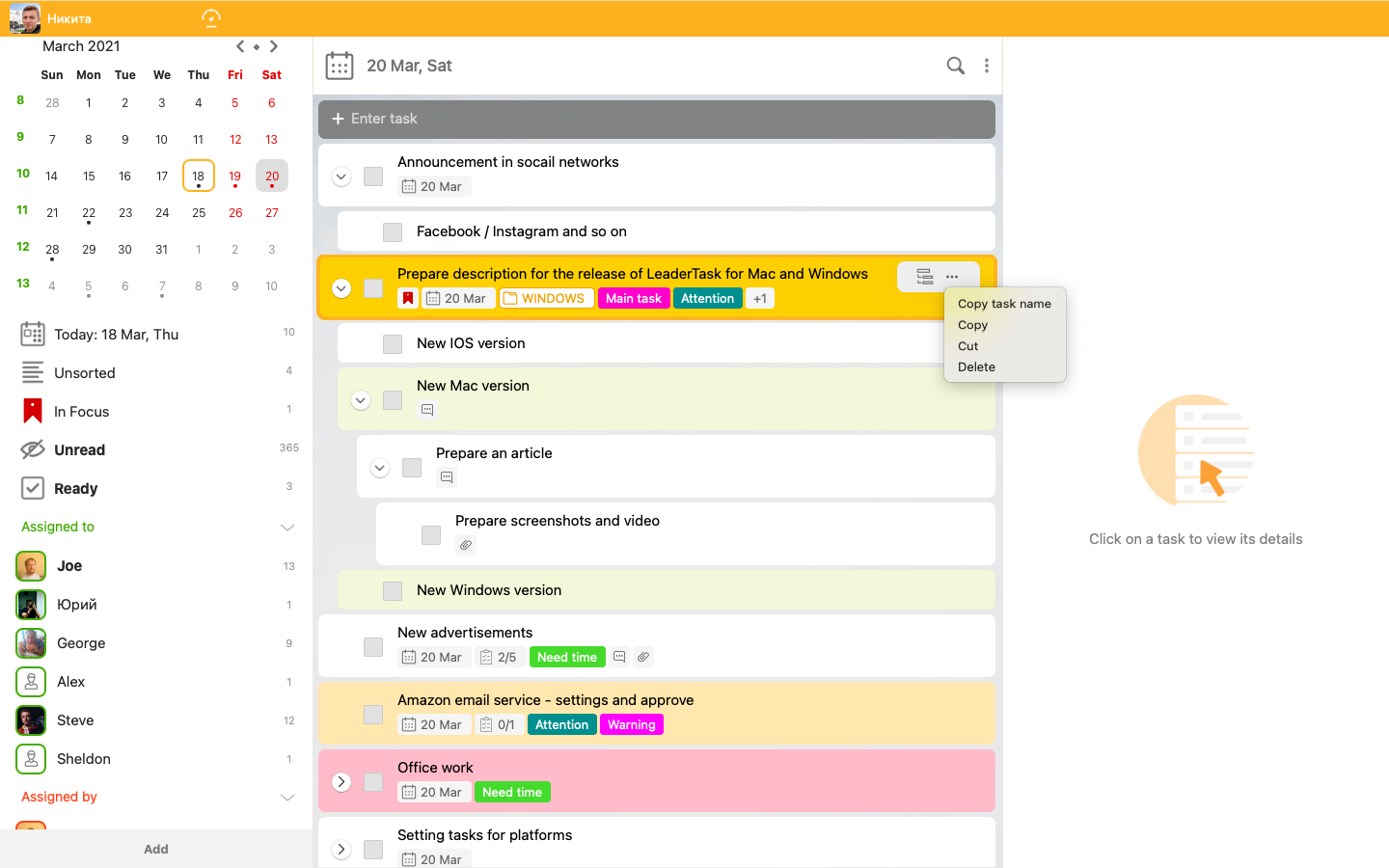 Along the way, with the introduction of a new design, customization of functionality and new improvements, we fixed a huge bunch of bugs. We can say with confidence that the application has become as stable as possible.

Here are some serious and interesting changes that have occurred in the LeaderTask program for Mac over the past 2 months. And we continue to work on new functionality, bug fixes, and stability improvements. It will only get better and bigger.

In general, a lot of work has been done on the development of LeaderTask for desktop PCs. Mobile development also does not stand still, but we will tell you about it a little later :)